Dancing with Daddy by Susan Hawke

I love my daughter, but finding out she wasn’t biologically mine is the best news ever.I’m a widower who is too scared to have the stupid test that would tell me whether or not I even have the gene that would mean dealing with a horrible illness and certain death. A gene that could’ve also been passed to my child, had she been mine.She’ll need her father, if something ever does happen to me…That’s why I search for Maddie’s biological father, and when I find him, ask him to become part of her life.What I didn’t expect is for him to become my best friend. Shane is fun and easygoing, the exact opposite of me. He makes me laugh. He’s the perfect antidote for my neurotic existence. And he’s bi, like me.But am I courageous enough to take the leap into falling in love with him?Dancing with Daddy is a super sweet, full-length, standalone, feel good mm romance. There’s no angst, just two very opposite men who befriend each other super fast then slowly find their way to love…all while parenting the precocious five-year-old who belongs to both of them.

END_OF_DOCUMENT_TOKEN_TO_BE_REPLACED

1881—Special Agent Gillian Hamilton is a magic caster with the Federal Bureau of Magic and Steam. He’s sent to Shallow Grave, Arizona, to arrest a madman engineer known as Tinkerer, who’s responsible for blowing up half of Baltimore. Gillian has handled some of the worst criminals in the Bureau’s history, so this assignment shouldn’t be a problem. But even he’s taken aback by a run-in with the country’s most infamous outlaw, Gunner the Deadly.

Gunner is also stalking Shallow Grave in search of Tinkerer, who will stop at nothing to take control of the town’s silver mines. Neither Gillian nor Gunner are willing to let Tinkerer hurt more innocent people, so they agree to a very temporary partnership.

If facing illegal magic, Gatling gun contraptions, and a wild engineer in America’s frontier wasn’t enough trouble for a city boy, Gillian must also come to terms with the reality that he’s rather fond of his partner. But even if they live through this adventure, Gillian fears there’s no chance for love between a special agent and outlaw.

END_OF_DOCUMENT_TOKEN_TO_BE_REPLACED

AMBROSE O’ROURKE
I’ve only met one person I couldn’t seduce—Augie Murphy, the man I love who thinks I’m straight. When I have a chance to be his fake boyfriend, it’s too much temptation to resist. It turns out that’s literally true, since I get carried away with a passionate kiss. He thinks it’s just a game, but it’s so much more than that.

Can I convince my best friend I want to be his boyfriend for real?

AUGUST “AUGIE” MURPHY
Ambrose is handsome, irresistible, and completely off-limits. That didn’t stop my stupid heart from falling in love with my best friend the first day we met. When he suggests we pretend to be boyfriends on a double date, my curiosity defeats my common sense. Even if we’re only pretending for one night, I want to know what it’s like to be loved by him.

Is it possible to turn my fake boyfriend for a night into my real one forever?

Love Means More is the second book in the Good Bad Idea series. This novella features fake boyfriends in a friends to lovers bisexual awakening romance. Full of cute sweetness and sexy fun, every story ends with a satisfying HEA and no cliffhangers. Each book can be read as a standalone or as part of the series in order.

END_OF_DOCUMENT_TOKEN_TO_BE_REPLACED

Brian Stagliano’s life should be pretty sweet right now. Two of his closest friends are getting married, and he’s taking a new, exciting step in his career as a doctor. Most amazing though, his best mate has been given the all-clear from cancer. But Brian’s normal has just been tipped A over T and the friendship he’s relied on for years is in danger. All because of five little words.

Andrew Fitzroy should be on top of the world. The cancer that’s haunted him is gone. He can finally get on with his life—except he doesn’t know what that life is anymore. Is he brave enough to come out as bisexual? Should he pursue architecture or stay in construction? Either way, Andrew knows happiness won’t be his until he has what his engaged friends have—love, joy, passion. So, he says those five little words to Brian—I’m in love with you.

Friends since childhood, Brian and Andrew have always been closer than brothers. Best mates. Nothing could ever tear them apart. Except for those five little words. Now, Brian’s not sure about so many things—their friendship, his own desires—and the foundation Andrew’s built his world on feels like its crumbling. But if they manage not to destroy everything they have together, Andrew and Brian might just find a new normal with each other.

END_OF_DOCUMENT_TOKEN_TO_BE_REPLACED

Add it to Goodreads

Will bookish magic, an adorable dog, and a little assistance from their friends help Brett and Rory realize the world is what you make of it? That a chance at happiness is something to be seized, not tossed aside?

After the death of his partner, Brett Tanner never thought he’d love again. It was too much to ask, or want. Until Rory stumbles into his bookstore, one evening, awakening his heart.

But, is it too much? Is he betraying his first love by finding himself attracted to the sexy, but socially awkward, younger man?

Love: Limited Edition is the first in the Home in Hollyridge series. It’s a dual POV about a younger man trying to find his way and an older widower who needs to start living his life again.

Note: A short LGBT listen. Originally published in the anthology Between the Covers.

END_OF_DOCUMENT_TOKEN_TO_BE_REPLACED

Zane
Four years ago, I met Liam Holdsworthy.
Hot, snarky, and hiding behind a sadness I couldn’t place. I wanted him, even back then. There were only two problems.
One, I was deeply closeted.
And two, he was dating my best friend.
Now I’m retired from the NFL and openly out, there’s nothing to stop me from getting my gay on.
When Liam comes back into my life, and I find out he’s single, I’ll find any reason to spend time with him. That’s how I created a list of gay first experiences I coax him into helping me with.
But I don’t just want his help.
I still want him.

Liam
After leaving a long-term relationship with a closeted NFL player, I went through a string of guys trying to find the one. None of them were boyfriend material, let alone the forever type.
I’m looking for a guy to come home to. Someone serious and down to earth.
I’m definitely not looking for Cooper Zane.
Yet, I can’t shake him, and not only because I’m helping him with his big bi bucket list. Every time I see him is like a shot of adrenaline to my system, and I’m always left wanting more.
I need Mr. Serious, and Cooper’s the least serious person I’ve met.
He’s newly out.
He’s never had a relationship.
And most importantly, he may be retired, but he’s not done with football.
He’ll do anything to get it all back. And I’m not prepared to be relegated to the sidelines ever again. 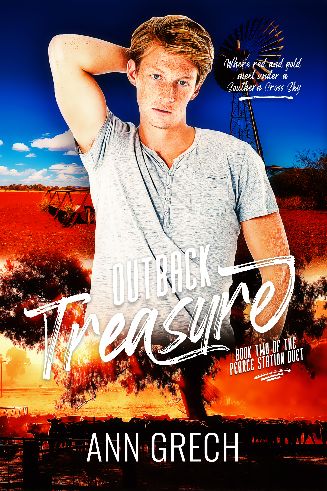 Deception tore them apart, but Pete and Scottie are drawn to each other like a moth to the flame. Trust and friendships are tested in Pete’s mission to rewrite the legend of the golden reef before time runs out.

Scottie Pearce never planned on falling for anyone, especially not the geeky history graduate nearly half his age. He and his lover have unfinished business. But is nature conspiring against them? The desert trying to tear them apart?

When secrets are revealed, who will be left standing? 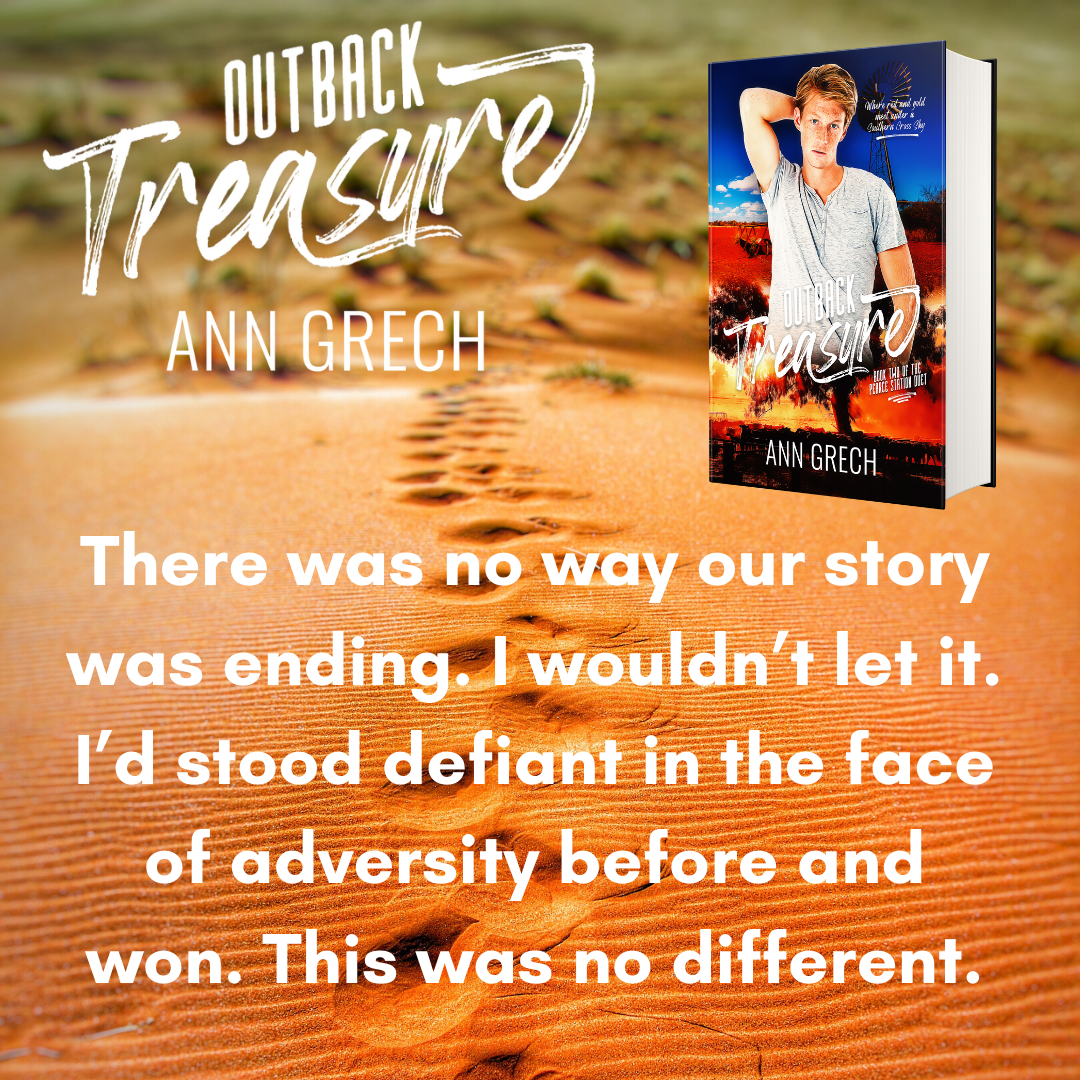