A stuffy composer meets a flirty ballet dancer. Can these opposites make music together, or will their dreams pull them apart? This is a sweet and steamy MM romance set against the sun-soaked hills of Los Angeles.

I should be applying for grad school. Or looking for a job. Anything to get out of my awful rut. But instead, I’m obsessing about the dancer I hooked up with at the ballet studio. Who would have thought a gig playing the piano would lead to the hottest sex of my life? Before we got down to it, I think I promised to help out on a dance concert he’s producing. I was in such a lust haze, I barely remember. He’d better text soon. I wonder if he’s still interested in seeing me in a *very* unprofessional capacity.

I can barely focus on the upcoming dance concert or my move to New York. I’m thinking about that cute pianist instead. Did I tell him that I’m moving? Things happened so fast between us I can’t remember. I’ve never had an experience like that where I was totally unraveled by a stranger. If I wasn’t about to move across the country, I would definitely want to go another round. But I’m leaving, so no more hot domination games with Joshua. I’ve got to keep things professional and not fixate on the way his elegant fingers moved across my body.

One Step Forward, Two Steps Back is the first book in the Ballet Boys series. Each book is a standalone, but for maximum enjoyment, I suggest starting with book one. 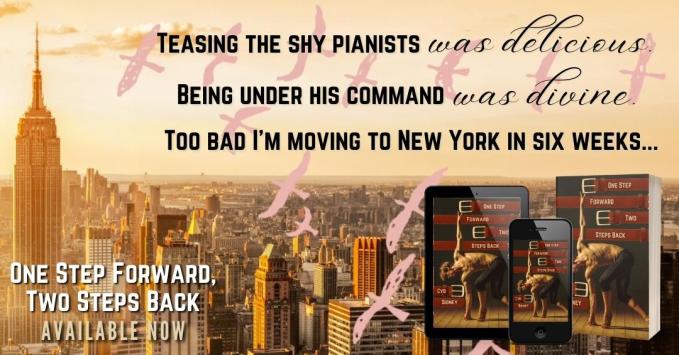 Get it together, man! Too late, Joshua realized that Brandon was leading him into the changing room, and he stifled the urge to run away. He was a full-grown adult man and he had been in countless locker rooms without even a flicker of arousal. But he wasn’t prepared now. Hadn’t taken his deep breaths and calmed his chi.

Brandon was still talking. What was he saying? He was talking about a showcase performance he was rehearsing for and how they needed a pianist. Had Joshua just agreed to help Brandon on some experimental dance project? That was the last thing Joshua needed right now. He should be plotting the next stage of his career, maybe reapplying to grad school. But no, he heard himself saying the words, “I would love to do it.”

Joshua wanted to strangle himself or simply march himself out the door, but then Brandon began undressing and his mind slowed way, way down. Brandon was telling him the details of the project, and he would definitely need to get them again because all of Joshua’s attention was focused on not looking at Brandon’s naked body.

Joshua locked his eyes on Brandon’s face, specifically his left eyebrow, and dared not look a hairsbreadth down. But Brandon was moving all over the place; leaning over to get his toiletries out of his bag, stretching up to hook his towel on the door, raising his legs to put on flip-flops. And of course, there was the bank of mirrors behind them that provided a complete and constant rear view of the whole proceedings.

Brandon talked through the whole affair. Joshua heard snippets about experimental theater and new modes of dancer expression. The best he could manage by way of response were non-committal “hmms” and the occasional “sounds great”.

Joshua finally felt himself recovering some semblance of cool while Brandon talked his way through a shower. But as soon as the dancer emerged gloriously naked and wet, Joshua went blank again. Brandon took an obscene amount of time toweling off, Joshua noticed with a combination of desire and dread. The dancer was positively ruthless about drying every nook and cranny as he stood just inches from Joshua.

Despite everything, there was this one drop of water that had fallen from Brandon’s hair and was taking a mesmerizing route down the curve of his neck, past a dusky nipple, over bunched abs, then down, down, down. 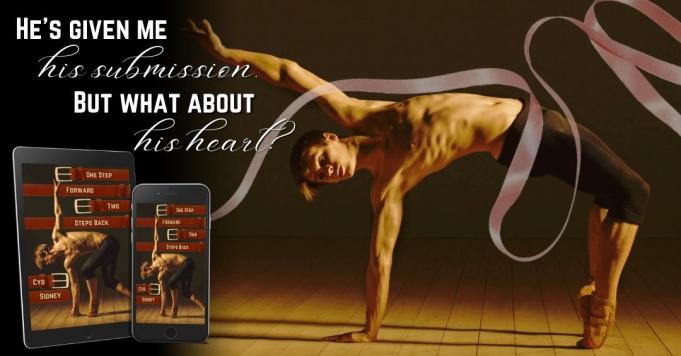 To celebrate the release of One Step Forward, Two Steps Back, Cyd’s is giving 2 e-copies of the release!

Enter the Rafflecopter giveaway for your chance to win!

My name is Cyd Sidney and I write queer, romantic tales with a lot of spice/steam/heat (let’s just call it sex). My stories are funny, surprising, and include lots of banter. I’m thrilled that you’re here and hope you’ll join me for the ride!