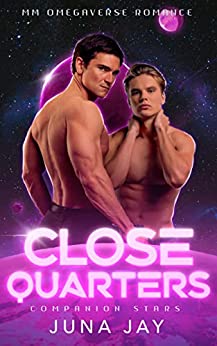 Dapper and determined Ketis has never quite gotten over the abrupt end of his first love affair. Sick of running into his stupidly handsome ex-alpha in every damn corridor of Debera Palace, he agrees to travel halfway across the galaxy to the capital of the Drualian Empire. That should be far enough to forget Soran, right?

Two years ago, fiercely protective Deputy Captain Soran Anstone failed his precious, brilliant Ketis in the hour he needed him the most. Unable to face the omega he doesn’t deserve to love, he jumps at the chance to lead a new security team, even if losing Ketis again hurts more than leaving the only planet he’s ever known.

Their surprise reunion aboard HMS Descant is unexpectedly intimate, but with Soran consumed by guilt and Ketis convinced that the alpha doesn’t care, neither can see that the flame between them is blazing brighter than ever. Then the ship is plunged into darkness, and the pair must track down a would-be assassin—and find their way back to each other—before interstellar peace is shattered forever.

Close Quarters is a 26k second-chance romance featuring mutual pining and lethal danger on a spaceship. While mpreg exists in this world, there is no pregnancy or birth in this book.

This is an Alpha/Omega book but with a science fiction setting.  I was a little concerned that I wouldn’t get into the book at the start because, obviously, there has to be a bit of world-building, and I thought that would be quite complex from chapter one. It settled down quickly, especially once they were on the ship. It was straightforward; the relationship and the side assassination plot took front and centre.

It was actually a really sweet story. Ketis is hurt by the breakup with Soren and actively avoids him. Soran feels similarly, but we quickly realise there is more going on with Soren than Ketis realises. They are thrown together when they end up on the same ship transporting the Prince of their world to an arranged marriage. Ketis is an advisor, and Soran leads the protection.

The animosity at the start doesn’t hide from anyone except them that Ketis is Soran’s Omega. They can pretend, but it’s clear they can’t hide their feelings. When danger threatens, honesty starts to show them that maybe second chances can happen.

I loved Soran’s overprotective, possessive side; they are incredibly sweet but also hot together once they sort their act out. A fun, short read with really likable characters and an interesting plot that I’d definitely recommend.  Don’t get hung up on the scI-fi setting if that’s not your bag; it’s actually more of a second chance Alpha/Omega story.