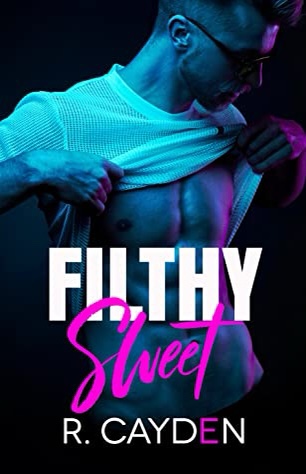 I try to enjoy the reputation I’ve earned as a hotshot music exec, even as I’m careful to hide my checkered past.
But after another unfortunate scandal catches me with my pants down (literally), I’m forced to clean up my image.
Enter Owen: my best friend’s little brother. The adorkable sweetheart is my wholesome polar opposite, which makes him perfect for a little fake relationship publicity.
Owen’s just out of the closet. He acts shy, but the more time we spend together, the more I glimpse his surprisingly filthy imagination.
And the more I can’t stop thinking about him.

I don’t do relationships. And with my past crashing down around me, I have no right to drag Owen into the chaos of my life.
But then he says my name with his gentle voice, and something unfamiliar stirs.
Owen breaks down the walls I’ve built, but can a guy like me give him the kind of love he deserves?

Filthy Sweet is a standalone M/M romance with a naughty geek, a secretly-sweet bad boy, and a dash of fake relationship. It features forbidden, best-friend’s-brother steam, dirty talk, and ongoing confusion about a pair of panties.

Filthy Sweet by R. Cayden is a contemporary rom-com filled with loads of laughs, embarrassing happenings, and sugary sweet moments. It contains quite a few tropes but most notably best friends’ brother and geek/bad boy. This story is high heat with a side of delicious filth.

Fox always tried to outrun his past and escape feelings of worthlessness and built up walls to keep everyone out. He works in the music industry, representing some of the hottest bands. Some negative publicity forces him to clean up his image. Owen agrees to be his fake boyfriend. One particularly spicy evening, they attend a rather adult party, and their hook-up begins. They have off-the-chart chemistry.

After trying to tell Owen’s brother, Reggie, about their hooking up, a real relationship forms. Reggie never got the letter Owen wrote, and it was a rather unfortunate answering of a phone call that got them called out.

Honestly, this book is packed full of storylines and plot development. It wasn’t exactly my type of kink, but it was impressively written. I think most people would enjoy spending their weekend reading this. I recommend it to anyone who likes smexy men and a little kink in their books. It is worth spending a weekend with this one.

Fox often calls his best friend’s little brother two things in this story. Growing up, he used to consider him a nerd. And Fox still does. Now, he also finds him dirty and hot. The things these two get up to are interesting and fun.

Fox hasn’t had it easy. And he had to do some crappy things to get to where he is today. Owen is as bright as they come, and he’s accomplished his doctorate at a younger age than average. They meet up again, and sparks fly. Fake boyfriends, one covering for the other to save his reputation and keep him out of trouble, and nerd boy discovers things about himself he never knew he liked.

This author definitely knows how to set a story on fire. If you like a little more sexual encounters, this is a story for you. And damn, are they HOT! I highly recommend this one, and I’m sure I’ll be recommending more in the future.

This book definitely fits its title. It was an enjoyable read with some angst and a lot of heat as well.

Owen is a sweetheart who hasn’t had the best luck finding a boyfriend or a lover. I liked Owen and was happy to see him open up to Fox. I especially liked that Fox was non-judgmental and helped Owen in seemingly small ways that helped Owen’s confidence.

Fox has a rough past that Owen only knew a little about. I was glad that Fox eventually told Owen everything and trusted him with it. I loved that Owen accepted Fox’s past without judgment. I felt terrible that Fox didn’t think he was worthy of Owen, but I liked that he realized that he didn’t want to let Owen go and did what he needed to make things work.

I loved Owen’s older brother Reggie and how supportive he is of everyone. Reggie is Fox’s best friend, and he’s a great guy all around. While I could see the potential conflict coming with Reggie, it played out differently than I thought, but I was happy with the resolution. I did feel like the conflict in Fox’s job was a little unresolved, but I understood where Fox was going with everything.

All in all, I really enjoyed this story.

Who doesn’t like a bit of brother’s best friend, fake boyfriend, mixed a nerd with a kinky side? R. Cayden does an excellent job of mixing these elements into a surprisingly sweet, very sexy story.

Fox left his hometown with little going for him but managed to make it in the music industry as a promoter. Getting there wasn’t easy, and he’s played tough and skirted the edge of morality to be successful. Fox has only kept in touch with one person—his best friend, Reggie. So when Reggie’s little brother Owen turns up, their paths cross. Owen is a nerd, has recently discovered he’s gay but hasn’t explored his sexuality and everything Fox shouldn’t want. Of course, though, he soon starts to get drawn in, especially when he realises that Owen is keen to explore his kinkier desires.

The plot moves along at a steady pace, and the angst is provided by their coming out to Reggie, and then Fox’s past catching up with him. Fox, of course, isn’t the tough guy he appears to be, and Owen isn’t a sweet innocent either. I liked them together. There are some seriously hot sessions.

This book is a nice, easy read that kept me entertained and has a satisfying HEA that ticked all the boxes. It’s definitely worth a read.