It is a standalone story

Zen is a half dark elf in a world that hates him, protected by being raised by the Order of the Sun to become a priest. He longs for a different life with a mysterious, beautiful man he only glimpses in dreams. After encountering an adventuring party, Zen is drawn to accompany them to destroy a fabled vampire lord, but the pull he feels toward those lands might be more fated than he realizes.

That night, before falling into an exhausted sleep—in his tiny, wooden bed with minimal padding and coarse blankets—Zen gently touched the scar that ran full circle around his neck. He tried ignoring it during the day, hidden by the high collar of his vestments, but in bed, out of his robes, his fingers often strayed there.

He didn’t know what had caused the wire-thin line. He’d had it all his life and often wondered if it had been a failed attempt to kill him as an infant. Like Father Lewis had said, he’d been abandoned on the steps of the temple.

No one wanted a darkling child.

Zen’s existence, his life, was most people’s nightmare, which was why it amazed and yet soothed him that he never experienced nightmares himself. His dreams were sweet. There he had no scars. In his dreams, he was whole and wanted.

A warm, human hand trailed slowly across Zen’s unmarred neck and down his naked body. Here his bed was plush and opulent, or perhaps it belonged to the man he imagined himself with. Zen had never met anyone like him in waking life, yet every dream he’d had since he first knew he desired men starred the same mysterious figure.

Zen never saw his face clearly, but he was still a vision of noble beauty. Skin pale as cream with soft color in his cheeks, neatly trimmed black hair that occasionally fell into his eyes—and oh, his eyes. Some might think them haunting or eerie, being such a rich, ruddy brown that they almost looked red, but Zen adored them. He adored the smooth, flawless form laid out beside him, trim but well-muscled, and as naked as he was.

Still, all those features painted an incomplete picture that he could never quite bring into focus.

The man’s sex was impressive though, no doubt conjured from Zen’s most carnal fantasies, as ruddy as his eyes, swollen and leaking wetness onto the sheets. Zen had often longed to know the feel of it in his hands, his mouth, and deep inside him, but his dreams never allowed more than a tease.

Zen didn’t know the man’s name and had never made one up, but he thought of him as an angel, giving him pleasures where real life never could.

“You are a beautiful crystalline snowflake, my love, silver and blue and pure blinding white.” He kissed Zen’s cheek, his fingertips tracing mischievously down Zen’s stomach. His other hand ran blunt nails through Zen’s short white hair.

That wasn’t right. Zen kept his snowy-white locks tied back, but his hair fell well past his shoulders. Like the missing scar, he was different here in the dreamworld.

“I miss you,” his angel whispered and bent to kiss Zen’s lips.

Then touch me, Zen thought, pressing upward and opening his mouth to connect them more deeply, while instantly wanting more.

He didn’t know why his mind created a human man instead of someone more like him. Maybe because humans were all he’d ever known. The man was stunning regardless and saw Zen the way he’d always wished someone would.

“Come to me. Come for me, my beautiful darkling, but come to me as well.”

Zen didn’t understand. How much closer could they get? His angel was between his legs, warm hand curling around him and squeezing with promise. Still, for all the lust that stirred in Zen, it was the intimacy of another kiss to his cheek that filled him with the most want.

“Please, love, come to me. Come…” He stroked Zen firmly while licking up along one of his pointed darkling ears, inducing a deep shudder from low at the base of Zen’s spine. “Come… my Zenos.”

Zen’s eyes snapped open as if triggered by a spring, his sheets sticky and damp atop him from how he’d come before waking.

Damn it. He rarely did that, usually waking hard and unfulfilled, and then taking himself in hand. Today he’d made a mess, and it wasn’t even morning.

4+ Stars
I wasn’t entirely sure what to expect when I started Courting Nightfall beyond a fantasy adventure. However, this author’s books and worlds are always so inventive, I figured I’d be in for a treat. I was right. The originality in Courting Nightfall is difficult to describe but the setting and characters are incredibly different and I think one that will stick with readers.

Courting Nightfall drew me in immediately. Zen is a character I couldn’t help but love and root for, no matter where his path took him. His journey and character progression are fantastically done, sweeping me into the world and keeping my interest start to finish. I love that Courting Nightfall delivers a number of twists and unexpected connections along the way. These twists, along with great world-building, an eclectic cast of characters, and fantastic action sequences make for an exciting read.

However, great the adventure, it is the romance that made Courting Nightfall all the more special in my opinion. The draw between Zen and the love he knows in his dream is powerful and surprising. It’s a funny thing when you find yourself not sure what you hope the ending to a romance will be, and that is precisely how I found myself for a good part of Courting Nightfall. Expected or not, I absolutely love how the author takes the story and romance in directions I would have never anticipated, captivating me all the while and making me oh so excited to see how it would all finish.

These days I find myself looking to step out of my comfort zone with tropes more and more. While fantasies, especially those with a darker side, aren’t my norm, books like Courting Nightfall continue to encourage me to try something different. The reward is definitely worthwhile and this book is one I’d certainly recommend to any reader looking for a fantasy or simply a different, well-crafted story.

Courting Nightfall by Amanda Meuwissen is a contemporary, fantasy story featuring adventure and magic. It reminds me of a very interesting, detailed DnD campaign.

While this is a legendary love story, it is also a tale of friendship. Zen is an acolyte of the sun God but never seems to be able to pass his trials to become a full priest. He is shunned by most because he is “other”. In time he creates a found family with a group of diverse men—who also face judgment from others—on a mission to kill a dark vampire lord. Throughout their adventure, they’re faced with much strife. Their friendship gets stronger by the battle. It’s complicated and angsty in such a great way.

While there are some elements of a love story, the heat level is very low. I think the relationships between the group of friends is what really stands out most. Fighting for what is right and finding deeper confidence in themselves and their cause. It’s a truly fascinating story.

Amanda Meuwissen is a bisexual author, with a primary focus on M/M romance. As author of the paranormal romance trilogy The Incubus Saga and several other titles with various publishers, Amanda regularly attends local comic conventions for fun and to meet with fans, where she will often be seen in costume as one of her favorite fictional characters. She lives in Minneapolis, Minnesota, with her husband, John, and their cat, Helga.

Enter the Rafflecopter Giveaway for a chance to win

an eBook copy of Courting Nightfall 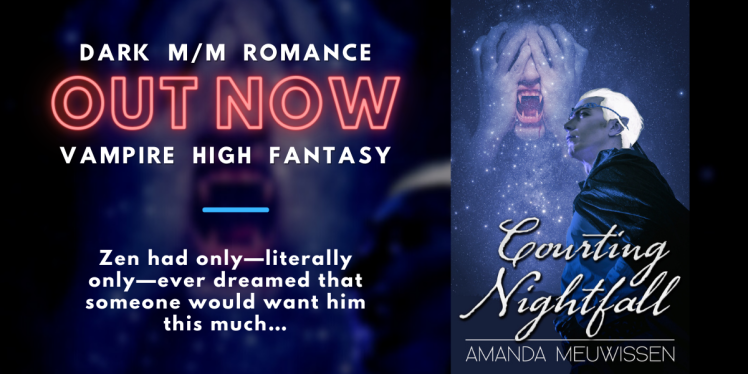