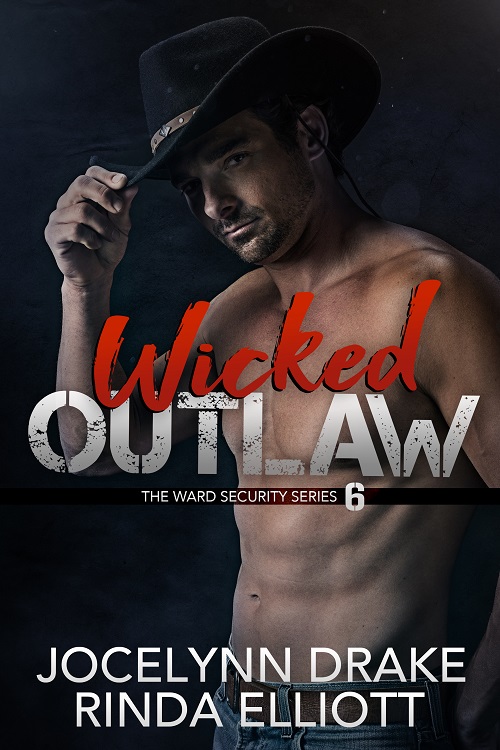 Cole loves the city. He loves the noise, chaos, and having tacos delivered at 2 a.m.

He loves his job at Ward Security. He might look like a bodyguard, but there’s nothing better than being counted as one of the hacking tech triplets.

There is no way he will ever love horses, cows, and the great wide open of Texas.

At least, that’s what he thinks until JB Alexander rides into his life.

He can’t deny the burning attraction of JB’s easy smile and weird sense of humor.

And while they’re dodging gun shots, crazy neighbors, meddling family, and secret plots, Cole might be forced to admit that he’s found an even greater love.

He was about to put on his headphones for some music when Rowe’s red head popped around the doorway. “Cole, I need you in my office.”

Cole set the headphones down and stood. He followed his boss and settled in one of the chairs in front of the desk.

Surprisingly, Rowe’s area was one of the hot spots for the entire building. His large office with the big, comfortable black leather couch tended to become a random crossroads or meeting place. All throughout the day, people popped in and out to ask Rowe questions, bring him updates, or share a joke. And Rowe welcomed every last one of them, regardless of what they did at the company.

They had meetings there often and the cool, blue paint on the walls gave the room a comforting feel. Cole might feel more at home in the tech room, but this was his second-favorite spot at Ward Security. Rowe always greeted him with a smile or a teasing comment like they were old friends.

“How’s the hand?” Rowe asked with a wicked smirk. He dropped behind his desk and relaxed in his large leather desk chair. “You cleaned that man’s clock pretty good.”

“Sore, but fine,” he replied, once again flexing his hand in his lap. “He still in police custody?”

Rowe shook his head. “No, bastard got out. They couldn’t hold him for threats. Which brings me to the problem I brought up last night. Derrick Briggs is a piece of work, with dirty hands in several deep pots, one of which is the local mob.”

Cole’s heart skipped a beat. The mob. Shit. No wonder Gidget had been so hesitant to talk about it. This was definitely worse than he’d imagined. “You think he’s going to come after me?”

“No,” Cole interrupted. “I don’t need a bodyguard. Look at me.” He tapped both hands on his broad chest. “I’m nearly as big as Sven. I can take care of myself.”

Rowe shook his head, not looking convinced in the least. “Not against a bullet.” He paused and added with a wry grin, “And nobody is as big as Sven.”

“A bodyguard isn’t going to help with a bullet, either.”

“Sven also has years of training. He knows what to look for, and he knows exactly how to handle an armed assailant or assailants.”

Cole glared at his boss for a moment. He didn’t think he’d ever utter these words. Never truly thought about it, but he was feeling cornered. Maybe it was time, considering the line of work he was in. “Then train me.”

Rowe leaned back in his chair, eyeing Cole closely. Cole held his breath. He loved his job behind the computer, working at Ward Security. He’d never had any interest in doing what the bodyguards did.

At last, Rowe shook his head. “Like I said, years of training. We don’t have that kind of time. But I am going to remember this moment.” He pointed at Cole, his smirk returning for a heartbeat. “However, I came up with a different idea. You, laying low for a while. Out of town.”

Cole’s eyes flared open wide. “What? No, that’s not a good idea, either.”

“It’s an excellent idea, and it’s not a suggestion. I’ve already called a friend, JB Alexander, and set everything up.”

Rowe nodded, the corner of his mouth turning up in a half grin. “On a ranch outside of Austin. It’s the perfect place for you to hole up while I work on getting Derrick Briggs behind bars.”

“You’re saying you want me to go to Texas.” Cole scrubbed a hand over his face, trying to get his brain to process the insanity Rowe was force-feeding him. “Isn’t this a bit of overkill?”

“I don’t think it is.” Rowe leaned forward, placing his forearms on the top of his desk. “Last night wasn’t Briggs’s first encounter with the cops. He’s managed to sneak out of assault charges and more in the past. There are rumors a few guys have disappeared because of him.”

Cole could feel the blood drain from his face to pool nauseatingly in his stomach. A kind of cold clamminess clung to his skin. This was getting worse by the second.

“Not only did you come between him and what he sees as his property, but you made him look like a chump in a very public, very high-brow place. He’s gonna want you dead in the worst way.”

“I see what you mean,” Cole replied in a low, rough voice.

“Good. Then it leaves me with two choices. One is that I put Sven on you and possibly another guy, twenty-four seven. At least until we know this guy won’t come after you.”

But that meant putting friends and coworkers directly in the line of fire to protect his ass. No, that wasn’t an option.

Rowe held up both his empty hands in front of him as if to say Cole was taking the decision out of his hands. 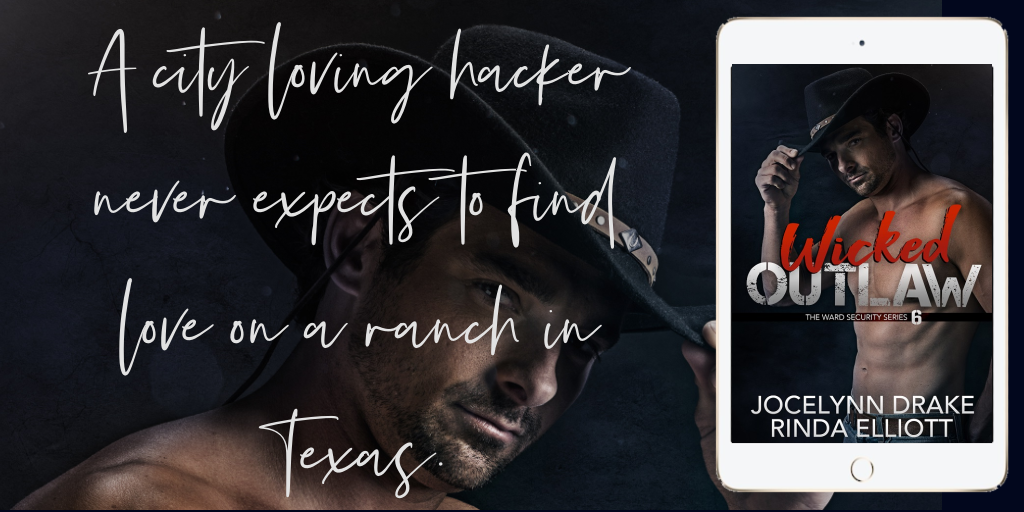 5 Stars
You know when entering the high-energy world of Ward Securities you’re in for a fantastic read. The gang is back with this romance/mystery story, in full force. It would help to have some back history, but I think you can keep up with this book. Rowe and Noah are here, and all you can hope is there is some self-control, or basically, they won’t blow up too many things.
Cole works for Rowe as one of his expert IT members. He excels at his job and is helping out in a less traditional role. Short on staff, he subs for one of the bodyguards on a job. Long story short, all ended well, but the disgruntled individual they took on has mafia ties and is really furious at Cole. Being safe, Noah asks Cole to spend some time on his friend’s ranch, in Texas, until things calm down.
J.B. Alexander is a former army ranger that has a sprawling and successful business. He loves ranching, despite the long hours and back-breaking work. Happy to help out his old army buddy, he nearly swallowed his tongue when he met Cole at the airport. When did IT geeks get so ripped and gorgeous?
I felt the progression in their relationship, though fast, it was authentic and endearing. They are thrown together due to odd circumstances, and spend a great deal of time together. Cole seems to blossom and become more open the longer he spends time with J.B.
An unscrupulous developer has his sights on J.B.’s ranch, which he needs to complete a huge purchase of surrounding land. His goal is to turn this pristine parcel of nature into a gaudy tourist trap. J.B. refuses and won’t cave, even with multiple people pressuring him. Mysterious problems start to pop up on the ranch, and Cole’s senses are alert. Someone is out to hurt this man he has grown impossibly close to.
The book is action-packed and yes to the Ward Security groupies reading this review, there are codenames! The bad guys are ultra evil, and our Intrepid gang is there to save the day. Another wonderful story that still remains fresh. Happy reading!
* * * Copy provided to Bayou Book Junkie for my reading pleasure, a review wasn’t a requirement. * * *

5 Stars
It’s been a while since I’ve read a Ward Security book and I was worried whether the time would mean that I had lost the flow and wouldn’t enjoy it as much. Oh me of little faith. It was like settling onto a comfy sofa and watching my favourite film. Blissful. I was straight back into the flow. All the old characters were there but here we focus on Cole, one of the tech guys. I loved that he wasn’t the stereotypical geek, but, instead, brains and brawn. Seriously hot.
This is a bi-awakening story but really settles more into a demisexual genre. It is JB that attracts Cole, the whole package. It is time spent together, the conversations, the shared meals that open Cole’s eyes to the possibility that he could be with a man. It is not until he gets to know JB that the attraction turns physical, although there is a clear, protective steak from the start. It was tough for JB, his attraction to Coke is immediate, but only increases as he gets to know the man. He wants a partner for life, someone just like Cole, but he’s out of reach as he’s straight. Isn’t he?
I loved the pace of the story—as Cole starts to deal with his feelings and the confusion they create for him. He doesn’t want to hurt JB. Throw in a side plot of problems on the ranch and you have an engaging book that I read in one sitting. These two are funny together, sweet, but it is the emotional connection they build that takes the story above the ordinary. The chemistry grows until it boils over, and boy, are they hot together.
A really great addition to the series which, if you haven’t read, you really must. Sometimes series weaken as they go, getting repetitive or formulaic. This isn’t the case here. A definite recommendation from me.
***Copy provided to Bayou Book Junkie for my reading pleasure. A review wasn’t a requirement.***

Get the entire series on Amazon