Book Title: Hidden in the Shadows 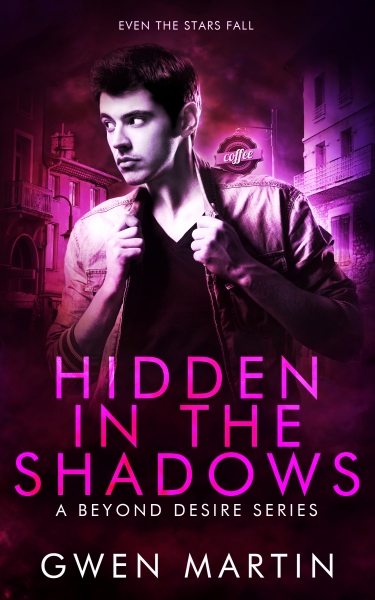 Even the stars fall

Can passion in the shadows bring love to light?

When Jordan, Ethan’s co-worker and casual hook-up, vanishes into thin air, the last thing he expects is to see him again.

But when Jordan returns, wanting to get reacquainted, Ethan is afraid of getting too close. Chemistry sizzles between them, driving them to seek new heights of pleasure—including in semi-public places—exposing not just their bodies, but their souls—as they grow closer.

Ethan wants more than a friend with benefits and the more he has of Jordan, the more he feels certain they’re a good fit. But destiny seems intent on pulling them apart just as they’ve reconnected.

They’ll both have to find their courage and take a risk on lasting love.

The crack of the ball on the table made Ethan jump. It rolled to the pocket but missed by a sliver. Ethan grinned, grateful for a chance to play. He knew he wouldn’t win, not by a long shot since there were seven solid balls still on the table to Jordan’s three striped ones. If Ethan wanted a snowball’s chance in hell at winning, he’d have to change tactics.

Ethan sauntered close to Jordan, until their chests were pressed together. Jordan was a little taller than Ethan’s six foot height, and he made a show of tilting his head up so that their lips lined up. Jordan’s tongue drifted out and sat at the corner of his mouth, his eyes boring into Ethan’s.

Ethan grinned and turned around, knowing that his ass would push Jordan backwards as he bent over to eye his target. He heard the small gasp behind him as he moved the cue between the first two fingers of his left hand, and stopped, assessing the table again with a hum.

“I think I need help,” Ethan said, turning over his shoulder, affecting a wide-eyed lost look. “Since you’re such an expert and all I figured—”

“Sure,” Jordan said roughly. He drew closer, closing a hand over Ethan’s, his chest pressing hard into Ethan’s back. Ethan closed his eyes for a moment to gain some composure and inhaled a slow breath.

“You want to make sure you line your eyes with the ball,” Jordan murmured against Ethan’s ear. “And make sure you hit the cue ball in the center so that it can travel straight out from the stick.”

Jordan guided the cue back slowly and then jerked it forward just to give the ball enough momentum to put the solid ball into the corner pocket. Ethan canted his hips back so his ass brushed against the bulge in Jordan’s jeans.

“You’re an excellent teacher,” Ethan murmured, tilting his head back. He only saw a bit of Jordan’s face, the position obscuring most of it, but what he saw was enough. Jordan’s lips were parted and when he swiped a tongue over his bottom lip, it took everything in Ethan’s control to not spin around and kiss him.

There was a fluttering sensation inside of Ethan’s chest that grew stronger. He straightened up and assessed the table once more to distract himself. He didn’t want to play pool anymore, his mind a jumbled mess of things he wanted instead with Jordan. When he tried to make another shot, he scratched the cue over the top of the ball.

Jordan tsked. “Such a terrible student,” he admonished playfully. He leaned over the table to line up his shot, and added, “To think I gave you valuable information—”

The sentence cut off as Ethan bent over and gently blew on Jordan’s ear. Jordan’s arm skitted forward, knocking into a set of balls and scattering them everywhere.

“That is so wrong,” Jordan groused, pulling himself upright. “What the hell do you call that?”

Ethan shrugged, leaning against the edge of the table next to Jordan and crossing his legs at the ankle. “You said you wanted to play dirty. I was just following the rules.”

“Is that so?” Jordan asked quietly, edging closer to Ethan’s side. Ethan searched Jordan’s face for a moment, his stomach twisting in anticipation.
Jordan was close enough that the warmth of his breath feathered over Ethan’s mouth. His hair was more grown out, and a small wave had fallen over his eye.

Those dark brown eyes that sat heavy-lidded, and as he leaned closer Ethan felt his lips brush against his.

The kiss was chaste, but Ethan’s body responded to it immediately. He concentrated on his breathing, hoping to calm the thundering in his chest. Jordan’s cologne, a mix of sandalwood and vanilla, overwhelmed Ethan’s senses. He wanted to get lost in the wave of it all, savor the familiar taste of it against his tongue.

Jordan and Ethan were sort of coworkers with benefits before Jordan disappears for 3 months, during which he doesn’t answer Ethan’s texts. When he comes back, Jordan seems to want more with Ethan, and while they fall back into their familiar pattern almost immediately, Ethan is afraid that it will all blow up in his face if he allows himself to get too close to Jordan, especially when the job Ethan interviewed for and that he wants almost as much as he wants Jordan becomes a reality.

So, I liked Ethan from the start, even if he was a bit of a pushover for Jordan. He seemed like a nice guy all-around. It took me longer to warm up to Jordan, and frankly, by the end of the book, I still hadn’t quite managed. I get why he went away (his abuelita (grandma) was placed in a hospice and died later), and I sort of get why he didn’t answer Ethan’s texts (he left his phone behind somewhere and got it a week later), but he had two and a half months to make some sort of contact with Ethan after and didn’t. Plus the way he just brushed off Ethan’s suggestion near the end because of his pride didn’t exactly endear him to me. I know Ethan made mistakes, too, believe me, there were times in which I wanted to slap some sense into the two of them, but out of the two of them, I think Ethan was more in the right. *shrugs*

Another thing that bothered me a bit was the sex to plot ratio. I like sex scenes, and some of the ones in this book were very well done and the chemistry between Jordan and Ethan was undeniable, but there was a lot of sex in this book and I ended up skimming several scenes because it was just too much.

Still, the book was entertaining for the most part and even if for me the balance between story and sex scenes was a tad off, I think many readers will enjoy Hidden in the Shadows.

Gwen Martin lives in Florida where the sun is always shining, the humidity is always high, and Disney is just a hop skip away. When she’s not trying to write one of her million story ideas, she’s usually hanging out with her husband and four cats.

Gwen first started writing at a young age, coming up with stories in class instead of paying attention to the math lesson. Since then she has been exploring her love of writing in various fan communities where she has learned how to cultivate character development and romantic interactions.

She has a strong love affair with cold brew coffee, black cats, and nerding out in various fandoms. When she’s not writing, she’s reading everything she can get her hands on, listening to a lot of lo-fi and making playlists, chilling with her four gatos and obsessing about Pusheen. Because it’s always about Pusheen. 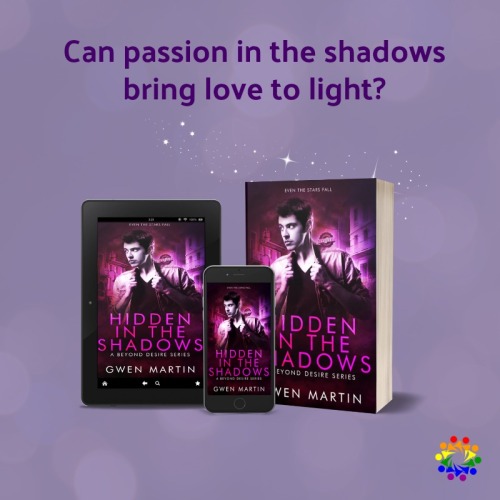