Shaun’s an outsider. He has a dark past and an even darker habit of cutting himself and burying his emotions under his skin. The only thing he’s got going for him is his guitar and a head full of lyrics.

But that’s going to be a problem for Shaun. He’s never had a real friend before. Oh, and he’s also finding himself hopelessly attracted to Jesse’s undeniable charm, which is definitely not going to work out.

Being gay isn’t brutal and Shaun has an image to uphold if he’s ever got a shot at becoming the death metal God he knows he’s destined to become.

For the first time ever, Jesse almost had a room to himself.

The new house had four bedrooms. It was their house this time, so they could do whatever they wanted with it. They kept the bunk beds though, and as usual, Jesse got stuck with the top while Sam got the bottom.

Jesse hung over the edge of his bed so he could see the tiny screen on their TV. His younger brother, Sam, had convinced him to do two-player in Call of Duty. He’d wanted to finish unpacking his stuff, but after an awful lot of complaining on Sam’s part about how completely bullshit it was internet wouldn’t be installed for almost a week, he’d agreed.

They were wasting a perfectly good Sunday evening and had been for the last few hours. Jesse sat with a blank stare, zoned out, the controller hanging loosely from his hands, when a soft voice from the doorway snapped him to attention.

Brian stood in the doorway, a pout on his little round face. He picked his way into the room and stood directly in front of the TV.

“Get out of the way!” Sam’s hands were occupied. He nudged the three-year-old with his foot.

“You should be in bed,” Jesse sighed.

“I can’t sleep. Lissa won’t stop crying.” Brian stepped over a pile of clothes and started up the ladder.

Jesse rolled his eyes, but he dropped the controller and crawled to the edge of the bed. He lifted Brian off the first rung and dragged him to the top bunk.

“Oh, man! I got you,” Sam laughed as he blew Jesse’s character away on-screen.

“Fuck you, I wasn’t paying attention.”

“Leave us alone! Go back to your room!”

But Jesse knew that wasn’t happening. Just as Brian had mentioned, he could hear baby Melissa wailing in the other room.

Monica shuffled past their door. She had PJs on, and her hair was bedraggled. The baby quieted somewhat, but that was just because she was getting attention. As soon as Monica tried to go back to bed, Lissa would start up again.

Brian watched Sam and Jesse shoot each other up. After a while, his head started nodding. The toddler slumped onto Jesse’s pillows and was soon fast asleep.

“No.” It was the truth. What was there to be nervous about? “We’ve been to a million other schools before. This one’s no different.”

“I guess,” Sam said. “But…I don’t know. Those other schools were different— Crap!” he cried as Jesse’s character skillfully sniped his.

“Should’ve ducked,” Jesse snickered. He earned a middle finger for his efforts.

As they waited for a new game to load, Sam returned to the topic of school. “This is different,” he said again. “Like when we were living with Joey, that was temporary.”

Jesse hadn’t thought about it like that. They’d been moving around since before he could remember. They’d stayed with friends and moved in with Monica’s many, many boyfriends. But Monica’s dad, their grandfather, had died about six months ago and he’d left them this rundown house in the middle of nowhere. Monica had considered selling it, but after a bad breakup with Joey, the last asshole boyfriend in Detroit, she’d decided to move them halfway across the country to make this hole-in-the-wall their own.

Nothing was ever set in stone, but from the way she talked about it, they’d be here for a while.

“Dude!” Jesse shot Sam in the head as he ducked out from behind a crumbling wall. “Are you going to play or what?”

It was a lame attempt at distraction, but it worked. Sam kicked the frame of the bed. The top bunk shook. “I’m gonna kill you,” he said.

Beside him, Brian stirred and moaned in his sleep.

Jesse sighed. He brushed a hand through Brian’s blond hair and lulled him back to dreamland as the next game loaded. 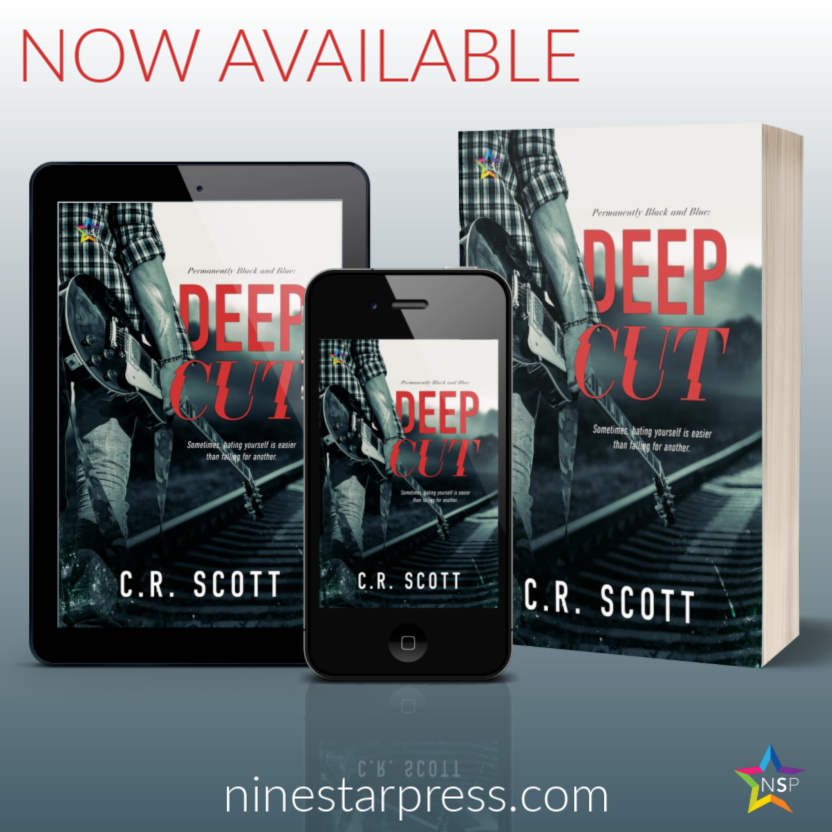 3.5* Weirdly addictive in its despairing darkness, but why wasn’t this advertised as having a cliffhanger ending? Grrr.

For what seems to be a first book from this author, this is a pretty good effort. However, reading the blurb makes me wonder if it’s not the blurb just for this book, but the next, too, as not everything that is mentioned happens in this tale. I wish there had been an indication of a cliffhanger ending as I didn’t clock until 91% of the tale gone that this wasn’t going to end in at least a glimmer of hope. Despite that, it did make me want to read book 2 to find out more about these leads and the possibility of a little light in their lives.
Readers should note that this is a dark book, pretty unpalatably so for a mass-market book. It comes with a warning of: self-harm, suicidal ideation, child abuse, murder/suicide, rape, drug use, homophobic slurs, witnessed necrophilia and nothing gets held back.
There’s more happening than the blurb tells you about and I wondered at first if this was an AU tale, because to have teens fixated on religion, like some were, didn’t really feel 2020ish. I also wondered about the lack of in loco parentis on the part of the leads’ teachers and about the total absence of social services. I also was totally unimpressed with Shaun’s frankly foul mouth and his rages; I did wonder if in book 2 we find that he is bipolar or has lingering mental health issues stemming from the stuff mentioned in the warning. I’m not knocking him, but I wouldn’t be surprised if he had, because boy, is that boy damaged and hurting with it. I think book 2 has the ability to be even darker and more despairing, especially as the writing seems to be on the wall for another, younger character to be heading down a path where youngsters should fear to tread.
I think, though, with respect to the author, that this book could have been shortened a bit by a competent editor. I’d have preferred a more compact, less warts-and-all tale if it meant not having to wait until the next is out, and, sorry, but at times the book rambled into stuff that might be setting up events that will happen in book 2, but that felt like a bit too much time was being spent on it and bigging up unimportant – at least for now – side characters.
ARC courtesy of the author and Bayou Book Junkie, for my reading pleasure.

C.R. Scott is a self-taught writer with a BA in psychology. Her characters are flawed and imperfect and she loves them for it. They urge her to write their stories. She currently resides in the ever-changing climates of Ohio with her husband and two children. This is her first published book, with more to come. You can reach C.R. by sending her an eMail.