Dancing with a Star by Grace Kilian Delaney 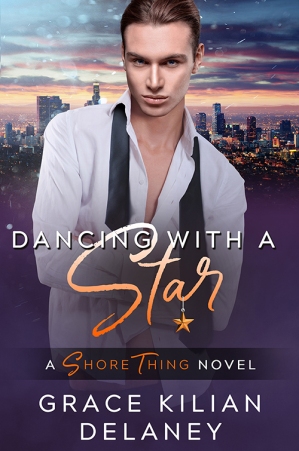 You had my heart as a boy, and whether you realized it or not, you’ve kept it all these years.

Androgynous fashion model Quinn Bouchard knew this day was coming. Hours before one of the most important photo shoots of his career, his wife asks for a divorce—a divorce they had agreed upon before exchanging vows—causing upheaval in his otherwise happy queerplatonic relationship. As if the day wasn’t hard enough, Quinn learns Xander Engstrom, his childhood best friend now a movie star, is part of the photo shoot, and their reunion awakens something Quinn hasn’t felt in years, leaving him sure of only one thing: he needs Xander back in his life.

Movie star Xander Engstrom has regrets, and the epic fight spread across the tabloids between him and his ex-boyfriend—an addict that won’t leave him alone—is the biggest. To control the damage, Xander agrees to an interview and photo shoot with a well-respected publication where he meets Quinn, the first boy he had a crush on. Xander’s pathetic, romantic heart falls all over again for his long-lost friend. The only problem is the type of relationship he’s thinking of isn’t possible with the stunning model.

Living on opposite coasts and worlds apart, they navigate through months of coordinating schedules, the whims of a finicky film company, and nights in hotel rooms to spend time with each other until secrets force them to choose between a future together or letting their pasts tear them apart.

Can be read as a stand-alone book as Quinn’s story starts before Julien’s in Living on a Dare (Book One) and ends a year later.

Xander lit the gas fireplace and got a glass of water from the kitchen area in the adjoining bedroom, leaving Quinn to admire the scenery. When Xander returned, Quinn was sitting on the bed and had his head and one arm stuck in his tight sweater, attempting to remove it.

Xander pulled the sweater off, getting a luscious hint of cologne, more spice-like than the floral one Quinn had worn the day of their photo shoot. Quinn fussed with his T-shirt, lifting it up and exposing a strip of delectable skin. The shirt tangled around his neck and elbow, his entire chest exposed, nipples pebbling in the cool air. Sinewy arm muscles and defined abs indicated Quinn exercised. His physique was gorgeous but thin. Aunt Silvia would want to fatten him up. Hell, Xander wanted to. But Quinn’s weight was typical of industry standards and no cause for concern. Unlike the shirt caught around Quinn’s neck. Xander finished pulling the shirt off and set it aside.

“Aren’t you staying in here with me?” Quinn toed out of his shoes and stood, the space between them so narrow Xander felt the heat of Quinn’s breath and hungered for his mouth.

Xander dropped his head, cursing as a certain body part perked with interest. “I want to. I really want to. But I can’t. You’re grieving, and you’re using sex and booze to escape the pain. I’ve been down that road, and that’s not how I want our first time to be. We deserve better.” If Xander ever had the privilege of dating Quinn, he would romance the hell out of him. Take him dancing. Send dozens of flowers. Cook for him and eat the meal by candlelight. Massage and kiss him from head to toe and then make love on a bed of rose petals.

Quinn recoiled, stepping away. “I think I gave you the wrong idea,” he said, wrapping his arms around his torso. He looked down at his chest, releasing a bitter laugh as if just realizing he was half naked. “Yes, of course I did. Don’t mind me. I’m more tired than I thought. I should go to bed.” He sat on the bed.

“Quinn? What was the right idea?” Sex seemed obvious to Xander, but clearly not what Quinn had in mind.

Xander and Quinn met when they were just kids and then lost touch. Now, Xander is an action movie star, who just broke up with his abusive, junkie boyfriend and is determined to turn his life around. Quinn, on the other hand, is an androgynous model, married and in a queerplatonic relationship, which is about to end. When Xander and Quinn meet again, the chemistry and camaraderie they always felt for each other is still there, but so are a whole array of problems, including them living on different coasts, an ex that doesn’t know when to go away and Quinn mourning the loss of his marriage.

I really liked Xander, he was kind, patient, supportive and really determined to make things better for himself after finally deciding to end things with his ex and getting clean.

I wasn’t sure what to think about Quinn and his relationship with his wife and her girlfriend. I’m not familiar with queerplatonic relationships, and to be honest, at first, or really, for most of the story, I wasn’t too fond of Yumi, his wife, and her girlfriend, Sasha. I got that Yumi and Quinn had a deal to end their marriage after some time, and that Sasha wanted to make things real between her and Yumi, but I didn’t like the way they went about it. Yes, it created some drama, but it wasn’t really the way to go about things, especially since they had their son to think about. They did get better after the divorce, but it was still all a bit convoluted for me.

I really liked Quinn and Xander together, though. Quinn’s divorce and his grief over the end of his marriage and the fact that Xander lived ion the West Coast and Quinn on the East coast, forced them to take things slow and while the attraction was always there simmering in the background, they took their time before they actually became a couple.

I liked Xander’s dad and aunt and his Uncle James, too, they were fantastic supporting characters.

Overall, this was an entertaining, engaging, emotional read. Yes, there were some aspects that weren’t exactly to my liking, but that’s more a matter of personal preference than anything else, so I have no trouble recommending this book.

Author, musician, and human slave to the dog and cat that rule her house, Grace Kilian Delaney enjoys giving her characters a dark sense of humor and a happily ever after.