What’s military sci fi without a bit of conflict, eh?
Conflict is drama, and how people deal with conflict
shows you the kind of people they are.
Stephen Moyer

Even if the Taking Shield series wasn’t all about an interstellar war, it would need conflict. If the characters having nothing to fight against, nothing that gets between them and what they want, then a story has no excitement and tension. If there’s no conflict, if the characters have nothing to overcome, then what’s going to make people keep on reading rather than toss the books aside with a complaint about how boring it all is?

Thankfully, I’ve got quite a bit of conflict on offer. Taking Shield is all about it, and on the grandest of scales. Humanity is fighting a war to the death with an alien race it has never even seen. So we have explosions, ships blowing up, handsome young men running around with lasers against fearsome cyborg warriors, colonies being overrun, raids behind enemy lines… for Bennet and Flynn, my heroes, that sort of thing is just the day job.

Now, I know it’s perverse, but as a reader, I soon tire of nothing explosions and lasers, and I want something more engaging than yet another big choreographed space battle.

The trick is to make that huge interstellar conflict more human.

Probably the only people who see the totality of the war with the Maess are sitting back on Albion, moving the forces hither and yon to counter attacks or to spearhead them into enemy territory. For most of the people fighting, that’s too vast a canvas to see, except in the tiny corner where they’re standing. That’s the corner Taking Shield is mostly focused on, showing how Bennet or Flynn deal with it all. The big war goes on around them, with battle and destruction and spaceships going up in a flash of flame, but as a writer I’ve been far more interested who Bennet and Flynn really are, why they’ve ended up as they have, who they love, who they quarrel with, how they grow.

Take Bennet, who’s my main hero (and quite possibly the love of my life, but that’s another story!). Bennet is not only fighting his little corner of a big war, but he’s facing up to a whole host of conflicts in his life. He’s a man who’s been shaped by his family’s long tradition of military service, used to putting duty and service first and his own desires and ambitions second. At the beginning of the series, he’s estranged from his father, and they have to work hard to reach and understanding and mutual forgiveness. He’s been in one emotionally draining, contorted relationship with his lover Joss, and now faces another when Flynn walks into his carefully controlled life when they both know the demands of the war will constantly pull them apart. As well as his day job with the Shield Regiment, he moonlights as an intelligence analyst with the Military Strategy Unit—he know far more about the conduct of the war than most people his rank and seniority, and what he knows horrifies him. He hates politics and politicians with a passion, yet is constantly pulled into the political game just because of that intelligence job. All of that, and how Bennet reacts and deals with it, is what Taking Shield is all about.

Taking Shield isn’t a romance, but it is a love story about two people caught up in something huge and threatening, who have to fight their personal battles as well as the big cyborg warriors, whose lives are all drama and conflict, stress and war. It plays out over several years against that backdrop of war and loss, where service and honour are always in conflict with love and desire. And at the end…

Yes, well. At the end, comes the greatest conflict of all.

Despite the military sci-fi tropes, despite the grand drama, I hope that you’ll give it a chance and see what sort of people Bennet and Flynn are. And that you’ll come to care about what happens to them, and hope, as they do, for a bit of peace and quiet to be together… 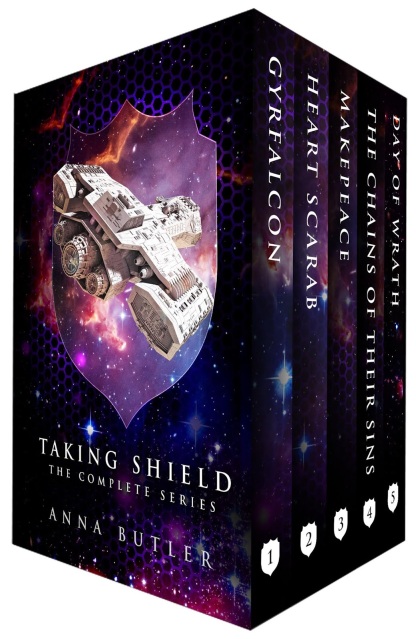 Hate buying books in a series until the whole thing is done? Then check out the Rainbow Award-winning Taking Shield series, just released as an e-book boxed set. Not only do you get the entire series, there’s a very nice saving on the cost of the individual books! Anna’s dropped in today to tell us more.

Earth’s a dead planet, dark for thousands of years; lost for so long no one even knows where the solar system is. Her last known colony, Albion, has grown to be regional galactic power in its own right. But its drive to expand and found colonies of its own has threatened an alien race, the Maess, against whom Albion is now fighting a last-ditch battle for survival in a war that’s dragged on for generations.

Taking Shield charts the missions and adventures of Shield Captain Bennet, scion of a prominent military family. Bennet, also an analyst with the Military Strategy Unit, uncovers crucial data about the Maess to help with the war effort. Against the demands of his family’s ‘triple goddess’ of Duty, Honour and Service, is set Bennet’s relationships with lovers and family—his difficult relationship with his long term partner, Joss; his estrangement from his father, Caeden, the commander of Fleet’s First Flotilla; and Fleet Lieutenant Flynn, who, over the course of the series, develops into Bennet’s main love interest.

Over the Taking Shield arc, Bennet will see the extremes to which humanity’s enemies, and his own people, will go to win the war. Some days he isn’t able to tell friend from foe. Some days he doubts everything, including himself, as he strives to ensure Albion’s victory. And some days he isn’t sure, any longer, what victory looks like.

More information and background on the Shield Universe here

Anna was a communications specialist for many years, working in various UK government departments on everything from marketing employment schemes to organizing conferences for 10,000 civil servants to running an internal TV service. These days, though, she is writing full time. She lives with her husband in a quiet village tucked deep in the Nottinghamshire countryside. She’s supported there by the Deputy Editor, aka Molly the cockerpoo, who is assisted by the lovely Mavis, a Yorkie-Bichon cross with a bark several sizes larger than she is but no opinion whatsoever on the placement of semi-colons.