Welcome to my blog tour for Becoming, Book 1 of the Dancing with the Lion duology, about the young Alexander before he became “the Great.” It’s an historical coming-of-age tale with a love story embedded.

Best known for conquering most of his known world before the ripe old age of 33, Alexander made even Julius Caesar weep (for not being him). But who was he before his meteoric rise? And how did his best friend and lover, Hephaistion, give him the emotional support needed for him to become Megalexandros (the Great Alexander)?

Contains everything from cut scenes, to videoblogs of Macedonia (Northern Greece, where Alexander grew up), to audio pronunciations of those weird Greek names!

For our GIVE-AWAY, I’m going to offer something a bit different. Yes, there’s a $10 gift certificate from Riptide Publishers. BUT, for the lucky winner, you get your very own scene request. Want to see a scene in the novel from a different character’s point-of-view? Want to know what happened after a scene ended, or before it began? Or is there something you’d like to see that wasn’t in the novel? Ask for it! I’ll write it just for you.

About Dancing with the Lion: Becoming

Two boys, one heroic bond, and the molding of Greece’s greatest son.

Before he became known as Alexander the Great, he was Alexandros, the teenage son of the king of Makedon. Rather than living a life of luxury, as prince he has to be better and learn faster than his peers, tackling problems without any help. One such problem involves his increasingly complicated feelings for his new companion, Hephaistion.

When Alexandros and Hephaistion go to study under the philosopher Aristoteles, their evolving relationship becomes even harder to navigate. Strength, competition, and status define one’s fate in their world—a world that seems to have little room for the tenderness growing between them.

Alexandros is expected to command, not to crave the warmth of friendship with an equal. In a kingdom where his shrewd mother and sister are deemed inferior for their sex, and his love for Hephaistion could be seen as submission to an older boy, Alexandros longs to be a human being when everyone but Hephaistion just wants him to be a king. 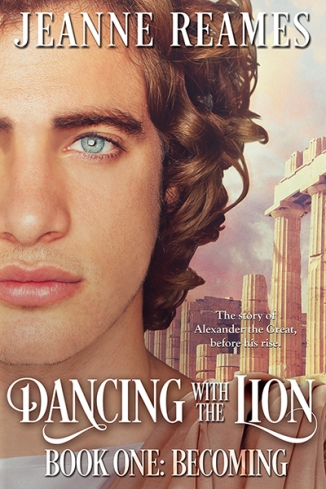 Now available from Riptide Publishing and where ebooks are sold!

About the series Dancing with the Lion

Alexandros is expected to command, not to crave the warmth of friendship with an equal. In a kingdom where his shrewd mother and sister are deemed inferior for their sex, and his love for Hephaistion could be seen as submission to an older boy, Alexandros longs to be a human being when everyone but Hephaistion just wants him to be a king.

Check out the series today!

When I first announced that I had a historical fiction book coming out, I got a lot of side-eye.

Not necessarily from my professional colleagues. Yeah, a few of them were (and remain) skeptical, but of historical fiction period, not necessarily mine.

It was largely everybody else. Could an academic spin a good yarn?

Well, we do it all the time. It’s called teaching, at least if one is any good at it. Not everybody is, of course. Also, what constitutes “a good yarn” can vary (just read reviews on Amazon).

First, I’ve been a writer longer than a professor. I’ve even published other things (not historical fiction). I’ve joked that most writers who take their craft seriously do conduct research. They just don’t usually go on to get a degree in the subject. So it’s probably more fair to say I’m a writer who became an academic rather than an academic who became a writer.

Second, to me, telling a story is all about the characters, and their emotions.

So Dancing with the Lion begins with a runaway boy who’s angry at the world because his favorite brother died, and another who fears he’ll never measure up as the son of the most powerful man in Greece. What happens when they meet? It’s also about those boys’ relationships with their fathers. And for Alexander, with his mother and sisters. It’s a love story, yes, but it’s also a story about family, and friendship. So it really is a love story, not just a “falling in love” story. All kinds of love. And a little bit of hate, too, here and there.

It happens to be set in ancient Macedonia (a kingdom just north of Greece). While reading Dancing, I hope readers get the same sense they might being led around New York City by a native New Yorker. I want to show you the cool stuff. I want the place to feel PAPABLE. Real. Deep. This isn’t one of those, “See 7 cities in 6 days” tours.

Yet the story isn’t about Macedonia. The story is about Alexander and Hephaistion growing up there. Some of what they experience are human universals: grief, first love, fear of failure. Some is a little more specific: going into battle for the first time, or dealing with brawling parents. Yet for me, the focus remains on how these characters cope with what they face.

For instance, and without giving too much of a spoiler, in one scene after Hephaistion has been hurt, Alexander goes to the temple of Darron, the Macedonian god of medicine, in order to make a sacrifice for his friend. It’s not unlike going to the hospital chapel to pray for somebody in the ER. But I don’t walk readers through the steps of ancient Greek sacrifice. Nobody is there for my class on Greek religion. The scene is about Alexander’s fear for his friend.

That’s why it’s a novel, not a history book.

Jeanne Reames has been scribbling fiction since 6th grade, when her “write a sentence with this vocabulary word” turned into paragraphs, then into stories…and her teacher let her get away with it—even encouraged her! But she wears a few other hats, too, including history professor, graduate program chair, and director of the Ancient Mediterranean Studies Program at her university. She’s written academic articles about Alexander and ancient Macedonia, and does her best to interest undergrads in Greek history by teaching them (et al.) to swear in ancient Greek.

One lucky person will win a $10 voucher for Riptide. But this giveaway also includes something much more personal:

Your very own SCENE.

I’ve committed to write, for the give-away winner, a scene of her/his/their choice.

Would you like to see X scene described from a different character’s POV (point-of-view)?

Or would you like to know what happened just before X scene, or right after?

Or maybe there’s something I didn’t write about at all, but you’d like me to write it for you?

There are some parameters, especially for the third category (write a scene not included). The request is subject to my agreement that the characters would engage in the requested behavior. So keep that in mind. (I wouldn’t write a scene wherein Alexander beat his dog, for instance.)

But I look forward to the winner’s scene challenge!

I have some “cuts scenes” as well as “missing scenes” (in the year between the novels) that will be available on my website (https://jeannereames.net/Dancing_with_the_Lion/cut_scenes.html) after July 1st

When done, this one will join them.

Each tour stop is a chance to enter by leaving a comment below. Entries close at midnight, Eastern time, on June 6, 2019. Contest is NOT restricted to U.S. entries. Thanks for following along, and don’t forget to leave your contact info!